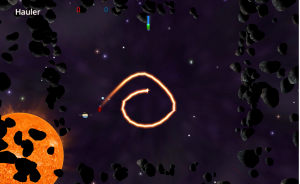 Welcome to Part 2 in my new series describing my “Hauler” prototype. Links to the web and PC version are at the bottom of this post. (And you can read Part 1 here, if you haven’t).

In the previous post I discussed the many (and serious) issues I had with my first Hauler prototype. This latest version was basically a rebuild and, in addition to the front-facing changes, many internal details (reorganizing code) occurred too.

If you play the prototype you will notice that we now have:

Obviously we are missing final art still. We are also missing music and sound effects. This is polish stuff and will be tackled later. More immediately concerning to me was:

The tails are long. Like really really long. Makes it awkward to get around very much.

Simply having an ‘arena battle’ style of gameplay is not sufficient. I had hoped with the improvements, between the last prototype and this, that it might be good enough without adding another gameplay layer. I was wrong and this prototype makes it clear.
In the next prototype I focus on adding more gameplay elements to the experience.

I also have a gallery page from which to easily review all my prototypes.

If you play the prototype and have some thoughts regarding it, let me know via the comments and we can discuss them (or I can incorporate the discussion into the next post, which I plan to present sometime in late October).