This is part 2 of 3 detailing our recent family vacation. The first entry discussed the great time we had at Legoland.

The first night after leaving Legoland and arriving in downtown San Diego, we took it easy. Our hotel was located near all the public transportation, so I was a bit nervous about how well we would sleep. Periodically a very loud train (the Coaster, I think) would rumble down and shake the hotel. Luckily enough that first night we were all so exhausted from the Legoland experience, that we slept fairly soundly.

The next day though we were up and at them and heading over to SeaWorld. We decided to purchase public transportation passes and we took the train to Oldtown, where, after a few mixups, got on a bus to take us to SeaWorld. 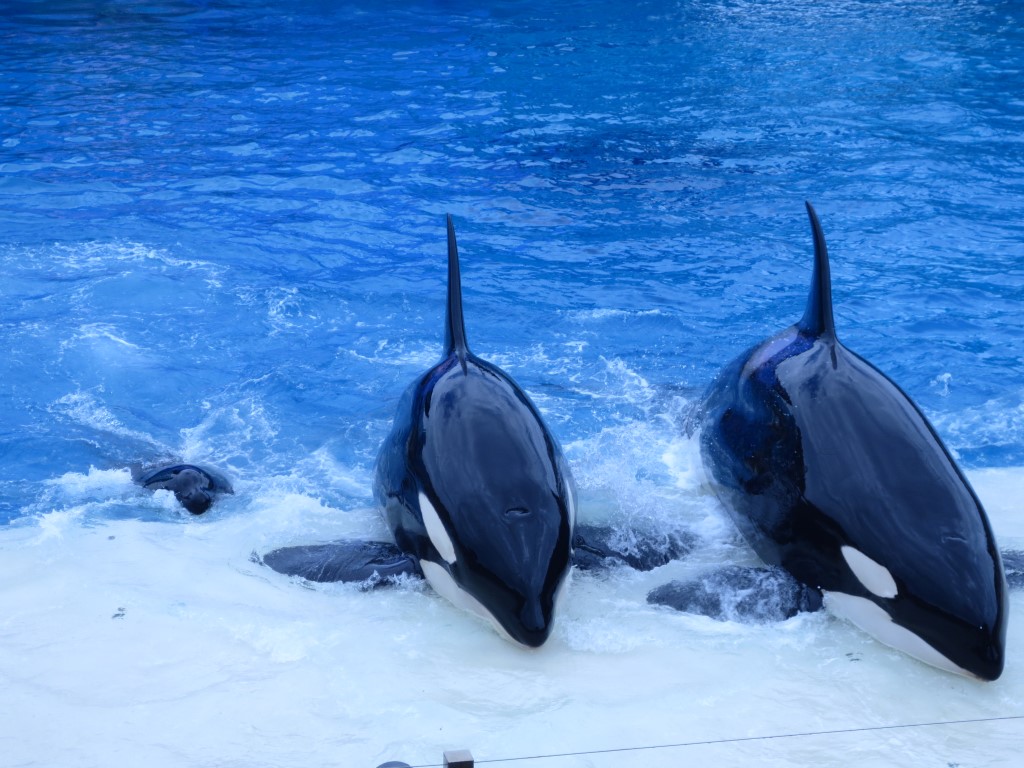 I did not enjoy SeaWorld at all. My dislike started with the bag search. Yes, before you enter the long line to get a ticket you have to stand in line to have your bags searched. Luckily I had decided not to bring my harpoon gun (this time).

After the search we wandered around a bit trying to decide which of the two long lines we needed to stand in. One was for buying tickets. One was for entering the park after said tickets had been purchased. Eventually we figured it out. We headed to the longer of the two lines.

This was where SeaWorld really tricks you. You think you are about to enter a really lengthy line (and you are) but the truth is that the line is even longer than you know. They do a sneaky redirect around behind the ticket booth and you don’t really notice the redirect until you have stood in line for ten minutes or so. Then when you see it you think, “Well, that’s lame, but it doesn’t look too long.”

Wrong. The redirect is long. Probably as long as the original line. It is just cleverly camouflaged. Had we known how long the ticket line was going to be I think we might have given up and headed back to the hotel to try a different activity (so I suppose there’s a bit of design cleverness at work here).

(In SeaWorld’s defense we went there on a Saturday during probably the peak time of year for the park… it was destined to be busy.)

What was most frustrating about the line was that it was in direct sunlight the entire time… no shade (unlike Legoland which has shade areas built into most of their lineups). Luckily it was a fairly cloudy day. We waited nearly an hour.

The next long line was the ticket check line. This line was not as long as the purchase line but the woman running our line walked away to handle an issue for another customer and we ended up waiting until she came back. People who came after us but had entered other lines got in the park before us. I’d say we waited about ten minutes here.

Once inside the park there were some interesting things to do — like the “petting zoo” where the kids could touch sharks and crabs. But for the most part I was dissapointed. It was crowded and there were not very many areas to just sit and observe things. Almost everything required standing in line. Legoland posted wait times in a variety of places, which allowed you to plan where you went next, but within SeaWorld it was just kind of confusing. We basically wandered about, paid over $20 for a few hotdogs and sat on the ground to eat them.

We did watch the whale show but I spent most of the time feeling sorry for the poor things. Plus the show was kind of boring. I guess I expected them to be leaping through rings of fire or something, to make up for the wait and the crowd. Probably the most fun we had was when we wandered to the back of the dolphin exhibit and got to watch them hanging out with the trainers (pre-show). For some reason they kept on throwing balls at the trainer’s heads while the trainers were busy setting up. That amused me.

There was also poor pedestrian traffic management. When the whale show exited, for example, a band was setup right in the middle of the path, making what was already a congested walk, even worse. Somebody wasn’t paying attention to Design 101.

(Plus a few of the exhibits were closed without any notice. That kind of sucked. Especially when you walked across the park to go to them.)

I don’t understand why anybody would go to this place (especially after having visited a better designed destination like Legoland).

The kid’s overall verdict was: “lame” and “dumb”.