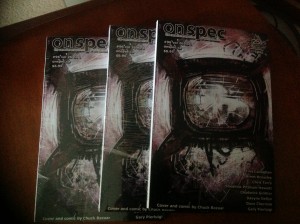 My contributor copies for my story “Sin and Toil” have arrived!

This is my fifth published story in On Spec. My previous stories include: A Ragman’s Vow, From the Sea, Touch the Dead, and A Terrible Loyalty.

There’s already a bit of a review (though more commentary, I suppose) over at Apex Magazine, on “Sin and Toil”.

We had a bit of a sump pump malfunction so that last couple weeks have not been as productive as I would have liked. I’m nearly ready to deploy the complete Lazy Designer series to those who have purchased it from my direct buy site. Hopefully this week. A couple weeks after that I should be ready to release the bonus content to those same customers (a Unity Tutorial, an Example Design Document, and a post-mortem on a Unity game I deployed).

And for those who have not read it, the excerpt for my novel “The Pool” is available from Amazon (it is a quarter finalist in their Breakthrough Novel Award).