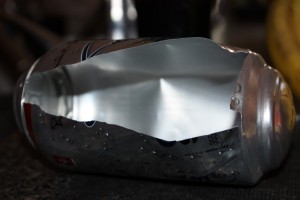 This is what happens when kids play with the minifridge. Pop freezes. And explodes. We had several of these delicious but deadly grenades the other day. Be careful out there!

As for updates… loads of progress on the Lazy Designer series, which is my focus for now. I won’t quite finish the rewriting pass on Book 4 before the holidays but that should be finished by mid-January, at which point I have a series of spelling and grammar passes that I will undertake, as well as building any example images required and the like.

And I do have a few stories available, some online, and some elsewhere:
Foolish Wishes, Fairy Kisses at NewMyths.com
“Cobbler and Minion” available in Ruined Cities, on Amazon, Kobo, and Barnes and Noble.
“Great White” in Oomph
“Slaying Dragons” in Plasma Frequency, Best of Year 1
And print copies of the first Lazy Designer book are selling well, which I’m a bit surprised at, given that this was just an experiment into print on demand publishing. I guess there’s still a lot of people who want print over digital.

Finally, I strongly encourage you to subscribe to On Spec Magazine! They’ve published several of my stories and I have collected copies of their magazine for well over ten years and am pleased with every issue.