This was suppose to go up a couple days ago, but I was busy, so here you go.

One of the cooler moments in writing is when you receive a contributor copy. Given that much of what I sell now is sold to online magazines, I’m not getting quite so many print copies as I once did, but last week I received my copy of Oomph, a superhero anthology that my story ‘Great White’ is in. 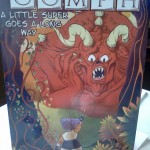 There’s a great lineup of stories in this and the quality of the book itself is nice too. There’s also a Kindle version if you prefer electronic copies.

I also received my “proof” copy for the print version of Lazy Designer: Start A Career in Game Design. 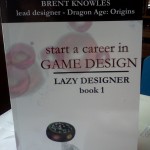 I created this via CreateSpace, because I’ve had a few people ask for print copies. I did this mostly as an experiment. Unless you are really eager to have a print copy of this book, I’d suggest holding off. Late next year, once the final two parts of the Lazy Designer series are released, I’m going to create a print version of all of them combined, which will probably be a better deal (re: shipping costs) than buying this. It took quite a long time to put together the print version (more work I found than the electronic copy) and I won’t be doing that for the other individual parts… just the whole series. But if you really need a paper copy of just the first book, then don’t let me stop you from buying a copy :)

Note: Amazon hasn’t merged the listing for the Kindle and paper versions of Lazy Designer #1, but I’ve put in a request for them to do so.
Note2: I should note that the CreateSpace process, while time consuming, was fairly well guided. It wasn’t that I didn’t know how to do something, it’s just that it took a while to get things working, especially the cover.