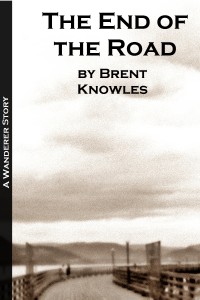 Wanderer looked down in satisfaction as he walked the old mountain road and saw the town below him. The stagnation of the human race was at an end and the survivors were now rebuilding. So ended the apocalypse. Wanderer continued towards this hotel from his past, an old, sprawling structure sitting high atop a cliff, until loud noises from ahead made him pause.
A cat’s howl. A woman’s cry. The raucous laughter of boys on the verge of manhood, the cruelest and most dangerous of ages. With a sigh he resumed his pace. He was the Wanderer and he would do what needed doing before doing what he needed.
The boys ahead were stupid, but even Wanderer had once been a boy (though he remembered little of that time). The skulls of the last ghouls rattled against the metalskin armor he wore as he rushed towards the boys. He thought of the losses suffered along the way, the Feast Wars, the long ghoul hunt, and how he, Wanderer, was now the last again. For how long had it been this way? He did not remember. The armor squeezed the thoughts out of his mind.
The cat stopped screaming just as Wanderer crested the hill and saw the boys, eight of them clustered around a young-going-on-middle-aged woman, who lay on her back in the wet snow, shrieking up at them. Behind them all stood the hotel, his destination, still clinging to the mountainside after all this time. The boys shouted their complaints down at the witch — father dead from exposure, vermin in the food, one family’s entire herd missing. Valid tragedies, yes, but none of them were the woman’s fault. The stupid boys should have been smart enough to realize that if this bawling woman with the tar colored hair was a witch she would have had power enough to stop them from nailing her cat to the weeping willow.
The cat, a yellow and black male, had cried a long time before dying.
The boys saw Wanderer and he shouted at them to back away and they obeyed, momentarily awestruck by this icon from the past, a living legend spoken to them by their grandfathers — Wanderer, the ghoul hunter. The armor glimmered, still functional all these years since the Feast Wars when it was stolen from the aliens.
The smarter boys scattered for town as Wanderer closed in on them, but four remained. One of them said, “We’re just punishing, is all…