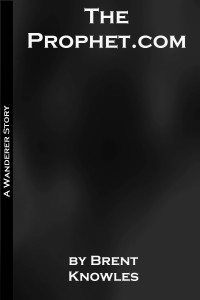 The helicopter disappears beyond the horizon and Wanderer returns his attention to the laptop sitting awkwardly on his knees, sharing space with a can of cold beans. He digs into the beans with a plastic spork as he views the web site behind his dust-covered screen. A photo of a large man with wide, powerful eyes, stares back at him.
It surprises him that these remnants of the old order linger still. Web sites: illusory constructs, full of ideas and utterly lacking in physical substance — devoid even of the paper reality of a book. Of course, they too will fade eventually as power grids collapse and the servers of the world die. Well enough. As long as this one site remains, even if only to goad him.
He snaps the laptop shut, drops it into the bag where he carries his dwindling supply of batteries, and stands up, stretching, bones popping back into place. He takes a moment to stare across the badlands surrounding him and with a heavy sigh he picks up his equipment. There’s less than when he started out. He walks. Dust rolls across his boots.
Figures approach Wanderer. He watches them out of his sun-squinting eyes as his hand drops to his gun but he does not worry. They are Scavengers and he is not a corpse. He watches them disappear into the sand dunes and wonders where they came from. Would they trek from Calgary all the way out here? Unless-
Adrenaline raises his pulse. Taking a swig of dry water from his canteen he carries on, wiping a callused hand over his bearded face and catching the pearls of water that cling to it. Ducking his head, he plows through the field of wind towards his destination. He walks for the day. Dusk comes before Salvation…

Read the rest (for free)

Or from: Smashwords, iTunes, Kobo, or Nook.