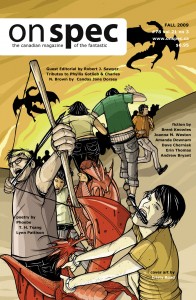 From the Sea
by Brent Knowles
Well, I kind of know the author of this one so I’ll just keep my mouth shut here.

Every Witch Way
by Joanna M. Weston
This story is about the only man in a family of witches and how he copes with the powers used by his mother and sister. I liked this story. It dealt with family issues and struggles — as did most of the stories in this issue, it seemed a theme of this issue, whether intentional or not, I’m not sure.

Favourite by Dave Cherniak
Another family themed story wherein a little girl is a vampire and the mother is coping with that as well as she can, keeping the family functioning and her daughter occupied. I enjoyed this story, it was a sad, disturbing tale, but strong.
Aconite & Rue
by Amanda Downum
A witch tries to protect her werewolf sister from a fairy queen. There were a few twists in the story I wasn’t expecting. Well written and entertaining.
Julia
by Erin Thomas
An interesting future world wherein the firstborn of a multiple birth (twins, triplets, et cetera) is afforded all the rights of a citizen but the other multiples are not (they are treated instead as replacements for the firstborn in case the firstborn needs medical attention). The main character of this story is the mother of triplets. She has difficultly treating the other children as less than her firstborn daughter. The conflict in the story grows when the firstborn becomes ill. A very good story, with an authentic world and characters I sympathized with. Nice work.
Wrenning Day
by Andrew Bryant
A crow is the main character in this one and is spreading sickness everywhere he goes. This story was a little long but covered a lot of ground… the crow thinks about philosophy and religion and society (the crow is rather well educated). I most enjoyed the beginning, with the crow rummaging around a house — the bird’s internal thought process is hilarious. A good read.

I was thrilled to be included in this issue of On Spec, my story alongside some fantastic stories. In addition Robert J. Sawyer wrote the editorial, celebrating On Spec’s 20th anniversary as well as many other Canadian SF anniversaries, and there were tributes to Phyllis Gotlieb and Charles N. Brown, both having passed away earlier in the year. There was an interview with the cover artist Cristy Road as well as an interview with me, which I really appreciate, I think Roberta Laurie did a great job of making some sense of my ramblings — the interview itself was done in the Dairy Queen a couple blocks away from BioWare (I was still working there at the time of the interview).

All in all a good issue and one that I’m proud to have had a story included within.