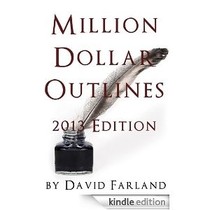 Ben Wolverton, age 16, was in a tragic long-boarding accident on Wednesday the 4th, 2013. He suffers from severe brain trauma, a cracked skull, broken pelvis and tail bone, burnt knees, bruised lungs, broken ear drums, road rash, pneumonia, and is currently in a coma. His family has no insurance.

Ben is the son of author David Farland, whose books have won multiple awards, and who is widely known as a mentor to many prominent authors, such as Brandon Sanderson, Stephenie Meyer, and Brandon Mull. Costs for Ben’s treatment are expected to rise above $1,000,0000. To help raise money for Ben, we are having a book bomb (focused on Nightingale and Million Dollar Outlines) on behalf of Ben

You can learn more about Ben’s condition, or simply donate to the Wolverton family here: http://www.gofundme.com/BensRecovery

WHAT IS A BOOK BOMB?

A Book Bomb is an event where participants purchase a book on a specific day (in this case, Wednesday, April 10th) to support the author, or, in this case, a young person in serious need: Ben Wolverton.

WHAT BOOK SHOULD I PURCHASE?

David Farland’s young adult fantasy thriller NIGHTINGALE has won SEVEN awards, including the Grand Prize at the Hollywood Book Festival–beating out ALL books in ALL categories. It is available as a hardcover ($24.99), ebook ($7.99), audio book ($24.99), and enhanced novel for the iPad ($9.99).

or, you can get the enhanced version complete with illustrations, interviews, animations, and its own soundtrack through iTunes: https://itunes.apple.com/us/book/nightingale/id560309064?mt=11

WHAT IS IT ABOUT?

Some people sing at night to drive back the darkness. Others sing to summon it. . . .

Bron Jones was abandoned at birth. Thrown into foster care, he was rejected by one family after another, until he met Olivia, a gifted and devoted high-school teacher who recognized him for what he really was–what her people call a “nightingale.”

But Bron isn’t ready to learn the truth. There are secrets that have been hidden from mankind for hundreds of thousands of years, secrets that should remain hidden. Some things are too dangerous to know. Bron’s secret may be the most dangerous of all.

Authors such as James Dashner (The Maze Runner), Brandon Sanderson (Mistborn), and Paul Genesse (Iron Dragon series) all PRAISED it. Nightingale has 4 and a half stars on Amazon. Read what other people are saying here:http://www.amazon.com/gp/product/B006P7SEBY/ref=as_li_qf_sp_asin_il?ie=UTF8&camp=211189&creative=373489&creativeASIN=B006P7SEBY&link_code=as3&tag=davidfarnet-20 Or, purchase the novel and find out for yourself.

WHAT IF I ALREADY OWN NIGHTINGALE? OR I’M NOT INTERESTED IN IT?

If you are a writer, you may want to consider purchasing David Farland’s MILLION DOLLAR OUTLINES. It has been a bestseller on Amazon for over a month and is only $6.99.

As a bestselling author David Farland has taught dozens of writers who have gone on to staggering literary success, including such #1 New York Times Bestsellers as Brandon Mull (Fablehaven), Brandon Sanderson (Wheel of Time), James Dashner (The Maze Runner) and Stephenie Meyer (Twilight).

In Million Dollar Outlines, Dave teaches how to analyze an audience and outline a novel so that it can appeal to a wide readership, giving it the potential to become a bestseller. The secrets found in his unconventional approach will help you understand why so many of his authors go on to prominence.

CAN I JUST DONATE MONEY?

You can donate money to Ben here: http://www.gofundme.com/BensRecovery

(Or you could purchase a book as a gift for someone else.)

I WANT TO HELP BUT I DON’T HAVE ANY MONEY!

The best way you can help is by spreading the word of Ben’s donation page, and/or this book bomb. Share it on facebook, twitter, pinterest, your blog—anywhere you can. Invite others to the event.

TELL ME MORE ABOUT BEN. WILL HE BE OKAY?

David Farland has been keeping everyone posted on facebook. Subscribe or friend him to get up-to-date information: https://www.facebook.com/david.farland1. At the moment, Ben is stable and appears to be improving.

Thank you!
Ben and his family greatly appreciate your support, and so do all who love and care about them.