A few days late posting this but we were busy over the holidays.

Anyways, March turned out to be an interesting month, in terms of writing. I ended up selling three stories. I’ve previously mentioned “Great White” being included in Crossed Genre’s anthology “Oomph: A little super goes a long way” and Perihelion accepting “Magic Circles”.

In addition I’ve sold a fantasy story (that I had previously sold to a market that ended up folding before the story was published). I’ll give a few more details once contracts are signed but this is a market I’ve sold to previously.

And in unrelated news, I finally found out what happened to my missing minecart in Minecraft. 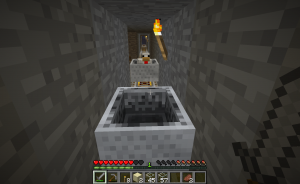