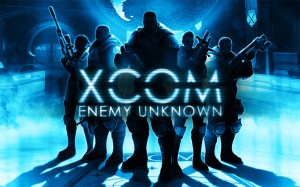 I should hate this game.

Really, if not for XCOM (a remake of a tactical squad-based game that I really enjoyed in my younger days), I probably would have finished Novel#5 sooner. So I really should hate it. But I can’t. It is just too much fun.

In X-COM Enemy Unknown the gameplay consists of building squads of soldiers and then using them to stop alien invasions. There are several different types of missions and part of the fun is deciding which types of soldier (heavy gunners, assault specialists, snipers, or support) to bring along for a particular mission. The player doesn’t choose the types of soldiers they recruit, so there’s an exploration element in determining your squad composition, as you take out new soldiers and in the heat of battle see what class they will become.

There’s a light story, mostly just a background thread to the action (which is entirely appropriate for this kind of game). But what I found interesting was that all the random chaos (hiring soldiers, deaths, combat mayhem) often comes together and suggests a player-derived story. This is similar to my experiences with games like Oblivion (see my old post on what happened to me when my horse died in that game).

I’ll illustrate what I’m talking about with a couple examples (Possible Spoilers — So Stop Reading if You Don’t Want Spoilage.)
***
***
***

My best sniper, Amy, was eerily accurate, rarely missing a shot. It became a running commetary between my kids and I (who often watch me play) that she’ll never miss a shot. She racked up kill after kill. It seemed impossible that she would hit so often (and she almost always avoided serious injury). She became my most used soldier; even when everybody else senior was wounded, Amy would always be available for the next mission.

Later in the game you research alien technology that gives you the chance to evaluate your troops for mental abilities (like mind control and force shields). Amy was in the first set of volunteers to be examined for these abilities. All the other candidates (and dozens more, afterwards) all failed to have any psionic ability.

But not Amy. She was my only soldier with the capability of using mental powers.

Immediately a story formed. This was why Amy never missed a shot. Even before her mental powers became evident, they were in-use throughout the game. This is the story the kids and I crafted, to explain what was really only a series of coincidences.

Another, shorter term event was when, during a mission, a soldier died and one of the other soldiers panicked and freaked out. My youngest son turned to me, sad, and said, “They must have been in love.”

I think that the play-making we do in our heads is intriguing; how we invest the characters we encounter with more life than they were given.

And a warning to those of you who buy Lazy Designer #3, once it is available. I’ve found XCOM to be a great source of anecdotal comments and there’s more than a few mentions of the game in the rough draft of the text so far.

Also, for anybody new stumbling onto this blog, the first two volumes of the Lazy Designer series are still available — How to Start a Career in Game Design and How to Make the Next Game.

And finally: credit has to go to GamrRank for getting me back into using Steam and consequently buying XCOM (and a couple of other titles). Probably wouldn’t have, otherwise. If you want invites, let me know (I’ll need a valid e-mail address to send them to you).