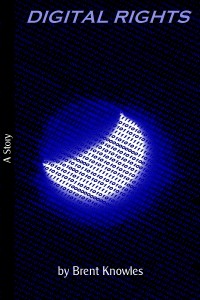 The Assistant responsible for the primary thruster arrangement killed itself just ten days after Izzy arrived on the solar station. The panicked chatter of the other Assistants prevented them from continuing with their own duties. Horror, speculation, and worse of all, wonder, flowed across the station’s network.
Izzy had to stop it.
And it was her fault; it never should have happened. She had been distracted. Later she would blame the ghost, but for now, she simply reacted. Simply acted. Her body twisted and jerked, her fingers puncturing the holographic displays that surrounded her, initiating commands as she fought for the station’s survival. Earth, beautiful, blue, perfect, floated in front of her, easily visible from any of the three portholes on the exterior wall of E-Module, but she saw only the geometry of digital space, the goggles she wore cutting out her view of the physical world.
Sirens whined as Assistants on the periphery of the contagion struggled with their workload. They sensed the disturbance and initiated the shrieking wails but most of the other Assistants were too busy gossiping and so lights flickered, air lines choked, and rooms cooled.
The three other technicians in the room responded to her hurried commands, scurrying from console to console even as she invoked her personal Assistant. She had no name for it, thinking that practice silly, but it had evolved with her from undergraduate studies through to her latest professional work. It had been refactored many times but its core personality, its recollectables, had never been purged, creating a continuity of companionship that exceeded in length her marriage. Versions of her Assistant still maintained the streetpower generators, those nuclear substations that were used throughout the Third World countries that were not yet tied into the solar network she now managed.
Her Assistant was reliable, rock-solid, and determined. Duplicating the AI process a thousand times, she seeded the clones through the network ordering them to spread a message of calm. She gave each clone a lifespan of five minutes — in that time they would have to quell a rebellion — if they failed every human on the station was dead.
Read the Rest

Or From: Writers of the Future 26, Kobo, Nook, Smashwords, or iTunes.