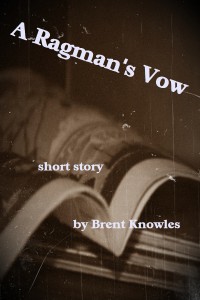 (Ragman, Issue #14) Below the slum known as the Labyrinth, Ragman sits atop an overturned crate, half submerged by sewage. Rats cover him.
“Stop with the puppy dog eyes,” Ragman says to them, “you won’t make me feel guilty about leaving the boy…”
The cab stopped. Dan’s fake-leather shoes stepped into dry snow, and he thought of how his own life seemed to parallel the city’s seasons, in pattern, if not in fact. The hustle and bustle of a wonderful summer had given way to a melancholic fall, which in turn was now replaced by an impassive winter. He had forgotten his scarf again, and so he pulled his business jacket tight to ward the mild wind as he left the cab to plow through sterile streets towards the bank. Rumbling bass turned his head in the direction of a long black sedan that had stopped for a red light on the street parallel to Dan’s sidewalk.
A curl of smoke drifted out of a half open window, and Dan stopped and stared at the smoker. His hands pawed at where his scarf ought be. How many times had she rushed out the door of their little suburban house to hand-deliver it to him? The light changed before he could do more than stop and gawk, and soon the car disappeared around a corner. Three years since he had last seen Amanda, his wife.
He shook his head, desperate to dislodge the past.
Ahead was the gauntlet, the homeless sitting or kneeling on cardboard with hats, cups, and folded hands held out. Mark and Stacey were singing and Dan smiled, donating more than he could afford, all the while pretending not to know these people. They returned the favor, with understanding in their eyes.
“That only encourages them,” Dan’s boss, the bank manager, said with a frown of disappointment. Dan did not care. Amanda had not been the only one to hit rock bottom. Difference was, he supposed, that he had scrambled back to the surface.
Or so he liked to believe.

Or from: On Spec, Smashwords, Nook, Kobo, or iTunes.